Special Project : Who will guard the guards themselves By Pratchaya Phinthong

Organized by BACC Exhibition Dept. in collaboration with gb agency

BACC Exhibition dept. in collaboration with gb agency, Paris, France present the work of Pratchaya Phinthong 'Who will guard the guards themselves' is the title of an exhibition involving two cities Paris and Bangkok: from two geographical points in relation with social and political situation in Thailand referring to Military Coup happening at past year. Pratchaya builds a narrative and creates different perceptual experiences. The work is a part of a solo show from May 28 to June 19, 2015 at BACC and from July 18, 2015 at gb agency, Paris, France.
For more information, please contact BACC exhibition dept. email: exhibition@bacc.or.th
About Pratchaya Phinthong 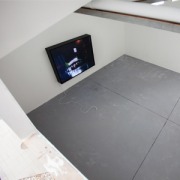