Bangkok Art and Culture Centre proudly presents a special talk “It Was Always You: Art and Moving Images From Video to Film to Media” by Mr. Stephen Sarrazin, a French film and media art lecturer; critic, writer and curator. The talk will give the audience background information and history of video art in order to better understand the concept and the progression of video art from the beginning until now as well as recognise its role as one of the important art forms.
This series of lectures are divided into 3 parts
-The Origins: From Signal to Performance
Saturday 7 March 2015 14.00hrs.-16.00hrs.
-The recognition of Video by Museums through the installation
Saturday 7 March 2015 17.00hrs.-19.00hrs.
-The move from Video to Media and Film installation
Sunday 8 March 2015 14.00hrs.-16.00hrs.
Stephen Sarrazin: a film and moving image professor, critic and curator working in Tokyo and Paris. He lectures at Paris 8 University, as well as other institutions in Tokyo (Aoyama University, Tokyo University of Technology, Institut Francais de Yokohama). He has also guest-lectured at Columbia University, New York University, Buffalo University, Ontario College of Design, and in numerous European institutions.
He has contributed to numerous publications, including Art Press, Flash Art, Cahiers du Cinema, Parachhute, InterCommunication, etc. He has published two books on artist Gary Hill (I believe it is an Image, Watari-um, 1992) and Surfing the Medium (Chimaera 1993), and on Japanese artist Akino Kondoh. In 2014, he published a collection of essays and interviews on contemporary Japanese cinema (Reponses du Cinema Japonais, Lettmotif, 2014). He is co-editor in chief of the film and media art journal, Mondes du Cinema (published in France by Lettmotif).
He has curated numerous installation exhibitions in Europe and Japan, and programmed video art screenings around the world for more than two decades, working with museums, galleries and independent art spaces. In 2014 he curated shows in Tokyo and Berlin, and will speak at the Grand Palais in Paris in December 2014.
** The Lecture will be in English with Thai translation
** Free entry
**For more information and booking please contact Education Department
Tel. 02-214-6630-8 ext 519   e-mail: education@bacc.or.th 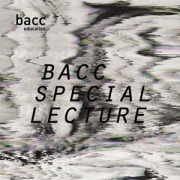 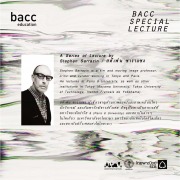