By Teerapon Hosanga, Wivat Phakdeethammaporn, Thanarat Siripidej, and Jedsarid Kaewrakmuk
Curator by Toeingam Guptaputra
“I will never quit playing”
An exhibition entitled “Gadget Boys” presents the gathering of four young male artists who are keen on Kinetic Art.  Kinetic Art is a terminology formally used for the first time in 1954. Kinetic Art means any art medium that contains “movement” whether it is recognisable by audience or depends on motion for its effect.  Bridget Rile’s two-dimensional painting, as an example, produces sensations of movement.  Artworks with real movement are driven by either natural force or electrical one.  Examples of pioneering artists include George Rickey and Alexander Calder.
Teerapon Hosanga, Wivat Phakdeethammaporn, Thanarat Siripidej, and Jedsarid Kaewrakmuk have advanced the meaning of Kinetic Art.  They make their works, or, in other words, their “kinetic toys” to relate to their audiences. Their works are not kinetic units for playing alone. They are units that can create a physical or imaginative relationship with the audiences. Besides, the artists create kinetic art with a reference to various fields of knowledge. Let’s explore their artworks.
Hosanga creates “Shy Swarm” (2014) for his audiences to chase five insect-like sculptures. When being approached by the audiences, they crawl away. Hosanga has applied the knowledge of robot art into his creative process.  The root of robot art can be traced from automata, a concept originated in the Ancient History. It was said that the first automata is Adam created by God. God created Adam from dust in five hours.  Automata refers to a self-operating unit. “Shy Swarm” stays still as if it were lifeless. When we approach, the five sculptures decide to go away. They are created to follow two rules: “stop” when in peace and “escape” when being approached.  Although not being programmed to make any ethnic decision, they encourage the sense of play inside us. They change us from art audiences to kinetic players.
Phakdeethammaporn creates “In the Park” (2013) for his audiences to play with his large sculpture. The audiences are invited to walk on the treadmill that manipulates the Varanus salvato-like sculpture. The faster we walk, the faster the sculpture moves. It seems that the Varanus salvato sculpture and we are the same thing that moves accordingly in a same rhythm. This is how the artist fights against his fears and worries in life, including the real Varanus salvato. He has decided to face them, observed them for one year until he understands their habits, behaviors, and daily activities. He has applied this biological observation into his work which can be viewed from the movement of sculpture based on the swimming character of the real Varanus salvato, and rough and colorful texture - made by sequins - developed from his understanding toward their real knobby and iridescent skin.
Siripidej creates “How to be myself” (2014) and “When did we grow old?” (2014) in order to present that objects can represent his emotions. Men always reserve their emotions and sayings. But, it does not mean that they do not want to communicate. Homosapien both men and woman communicates all the times with or without an intension. Scratching one’s own head is considered as a “medium” or a signifier that communicates a message or a signified such as boredom. Too, Siripidej selects familiar tools that are a wrench and a grinder as his media that express his emotions. They include his confusion developed during the transformation of his personal life from teenage to adult, and his bashfulness when he is stared by an unknown person. We may have to gradually approach his kinetic objects. Otherwise, we may not be able to receive his messages.
Keawrakmuk creates “Special Morning” (2013) that shows us that the movement of objects can bring him back to the past.  He has mixed his memory of different, yet related situations. The rocking chair and the sound of a teaspoon striking against a glass in “Special Morning” can be seen as his recollection of a relationship between the artist and his father. He has recalled an image showing his father sat him on a chair and fed him before leaving for school. Another image shows up; the striking sound of metal teaspoon along with coffee smell woke him up in the morning. When one situation is recorded in one’s memory that previously recorded other uncountable situations, it is unavoidable that that situation combines and mixes with others through time. When the memory’s owner recalls that particular situation, it always drags other situations. “Special Morning” expresses that when being recalled, the feeding situation drags the coffee-making situation with it. The kinetic work shows how the two situations are mixed and combined.
Men never stop playing because playing is a medium that can communicate their messages. A result that they expect from the audiences is their sense of playing. Let’s communicate through the act of playing. 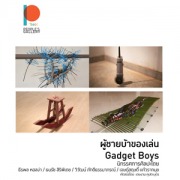 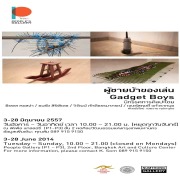