The retrospective exhibition of Professor Chalood Nimsamuer, the national artist and the master who creates the artwork for five decades, presents his artworks from past to present. For example, installation arts in 'Rural Artist' concept, drawings of 'Poem', 'Daughter' and paintings of 'Dhammasilpa'. This exhibition will also feature his latest collection, 'Mural Paintings'.


Chalood Nimsamer, a senior artist and one of Silpa Bhirasri’s star student, is an influential figure in Thailand’s contemporary art. As an experimental artist, Chalood has created many valuable works of art earning him the honor of being titled the “Distinguished Artist” (Painting) in 1959 and "National Artist" (Sculpture) in 1998. Being a great teacher, Chalood has fostered plenty of artists in the art scene. He also pioneered Silpakorn University’s education by establishing the Department of Graphic Arts (1965) and the Department of Thai Arts (1976) in the Faculty of Painting Sculpture and Graphic Arts. Apart from that, he is also an art scholar who has written textbook “Composition of Art” together with various books and articles on arts that have proven to be very beneficial to Thai art world.

However, Chalood has always addressed himself a "rural artist" who still continuously produces artworks in order to pass on his experiences to his students considering himself as their “teacher”. This exhibition is thus not being held just to honor Chalood Nimsamer on any particular occasion but rather do so from realizing the value of his creations throughout 60 years and hoping to showcase his valuable art to the public. It creates an opportunity for people to appreciate and be acknowledged about the thoughts and creativity of one of the most important figures in Thai contemporary art history.
The exhibition is displayed in six series of artworks including:
"Mural Painting" series is the latest artworks created during 2010-2013 to express his emotions, thoughts, and imaginations that happened during different periods of life in relation to surroundings and situations. These are reflected through main figures which are a woman and a child. It symbolizes the pure and gentle feelings seen alongside figures which are inspired by nature and cultural surroundings through simple techniques such as ink drawing and acrylic-painted on Sa papers, which are all natural materials. All of the artworks are fully displayed on the walls as a way of embracing visitors to come and experience the atmosphere of the mural painting as a whole. It is a contemporary mural painting that does not tell a story of Buddhism but instead a story told through life experiences of the artist.
"Dharma Silpa" series is the work that Chalood started around 1987-1996 with no intention to express any Buddhism meaning but rather as a tool to convey his mindset that was nurtured by dharma. The artwork has a simplistic form with serene structure and its soft color tone pleases the eye. The series reflects the purity of mind that is calm and free which is a result of a meditational state that occurred while working and studying Buddhism.
"Drawing” series represents the technique that Chalood especially adores and had a chance to create many artworks with such technique as it is a simple technique yet a great way of expressing emotions and feelings. The series consists of four drawings which are "Visual Poetry" (1982-1983), "Daughters" (1985), "Sculpture in Landscape" (2007), and "Meditative Drawing” (2011).
“Rural Environmental Sculpture” series emerged in 1982. Chalood drew his inspiration from the way of life of Thais in a rural area to create artworks with styles and expressions that are ahead of its time. He used objects and materials around him, both natural and artificial that he could find in daily life, as a medium of his expression. He began by hanging and placing the objects on a tree stump then moving towards hanging the objects on his own body as a means of expressing his idea and a relationship between human and nature in Thai rural way of life. From the historical view of Thai contemporary art, Chalood is considered one of the early pioneer in Thai conceptual art.
“Rome Drawings and Abstract Prints” series represents his study of intaglio technique in Rome around 1956-1958 and lithograph in the United States of America in 1964.  Chalood went around drawing landscape at various locations in Rome, Italy and Paris, France. These artworks including several abstract graphic arts using an interesting technique have never been presented to public.
“Early Works” series represents his works during 1955-1962. Chalood created artwork which reflected Thai rural life with the printmaking technique of wood engraving and he is the first person in Thailand who experiment with Masonite or hardboard replacing the use of real wood. He then moved on to work with woodcut technique. His works during this period consisted of monochrome as well as color woodcuts. It is a discovery of technique that is one with artist’s emotional expression telling a simple story with simple shapes and reflecting true essence of being Thai. Moreover, there was also the "Rural Life, Tempera and gold leaf" series (1956) which Chalood was the first person to experiment with gold leaf on contemporary art pieces. It was an important step to harmoniously incorporate traditional Thai art with contemporary art in order to convey the stories of Thai way of life, leading to an emergence of Thai contemporary art. 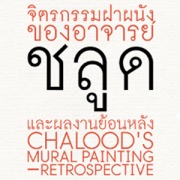 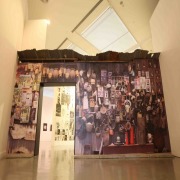 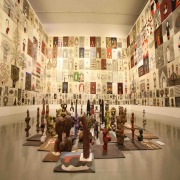 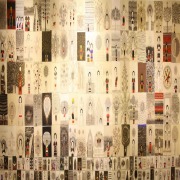 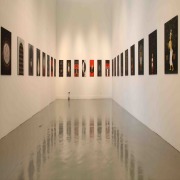 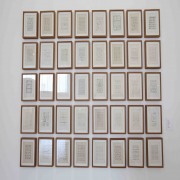 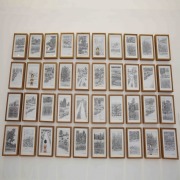 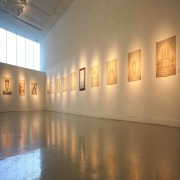 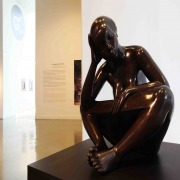 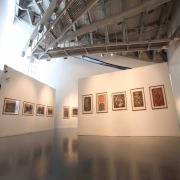 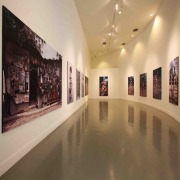 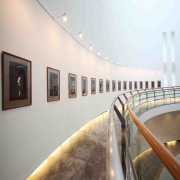