The event is a part of "Hear Here", the exhibition

Noise has long been introduced as a musical aesthetic to broaden the perception of sound as an artistic medium and has potential to be used creatively to extend our capacity to appreciate more complex sound. Even more so in Japan, where the art of noise has long been established, for Atsuhiro Ito, it starts from an accident when he discovers noise reaction of a radio in relation with a fluorescent light. A relationship of light and sound forms a unique rhythm that stirs his interest.
This time, Atsuhiro Ito will perform with his own made instrument called “optron” which
produces noises from the electrical discharge of a fluorescent light. The music played on optron is a repetition of intense flickers of light and noises and it stimulates and attacks our visual and auditory senses. By stimulating your visual and auditory senses, Ito allows you to rediscover those senses which got dull in our daily life.
About Atsuhiro Ito
Artist/Optron player, born in 1965. Lives and works in Tokyo. Ito graduated from Tama Art University Master's Degree Course in 1992. He launched his career as a visual artist in the late ’80s, and in 1998 began presenting sound performances all over the world with his own made instrument called “optron”. His major exhibitions include “Roppongi
Crossing”(2004/Mori Art Museum), solo exhibition “V.R.”(2009/ Hara Museum) and
Solo exhibition “Paint & Collage Works 2010”(2010 / NADiff a/p/a/r/t) and solo exhibition “V.R. Specter -??? visible sound, audible light”(2012/SNOW Contemporary). Ito also performs extensively worldwide, including "NJP SUMMER FESTIVAL 21ROOMS"
(Nam June Paik Art Center, Korea, 2011) and "Singapore Arts Festival 2010”
(Supperclub, Singapore, 2010).
The Performance is planned and organized by BACC Exhibition Dept.
For more information on the event, please contact Communication Dept.
Bangkok Art and Culture Centre 939 Rama I Rd., Wangmai , Pathumwan , Bangkok 10330.
Tel. 02 214 6630 – 8
Fax. 02 214 6639
www.bacc.or.th
www.facebook.com/baccpage
www.facebook.com/hearhereexhibition 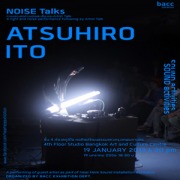