By the United Nations Development Programme (UNDP) and the National Anti-Corruption Commission (NACC)
(On December 9 with a special sneak preview event held from 10:00am to 12 noon)


Twenty three universities from across Thailand will participate in a special anti-corruption themed art exhibition sponsored by the United Nations Development Programme (UNDP) and the National Anti-Corruption Commission (NACC) starting on International Anti-Corruption Day, December 9 at the Bangkok Art and Culture Center (BACC).
A recent ABAC poll reported that a majority (63.4%) of Thai people hold the view that corruption in government is acceptable as long as they also benefit from it. A majority of young people under 20 now hold the same attitude. In response, UNDP has engaged civil society and the NACC in raising awareness about the dangers of corruption in Thai society.
Rather than look externally for the causes of corruption, the exhibition will feature art aimed at exploring corruption from the perspective of the individual.
“Fighting corruption in Thailand begins with all of us—with our actions, our behavior, and our attitude,” said Luc Stevens, UN Resident Coordinator and UNDP Resident Representative in Thailand.
The art exhibit will begin on December 9 with a special sneak preview event held from 10:00am to 12 noon, where student artists will be on hand to present their work and discuss their feelings about corruption in Thai society.
The exhibit will continue in the 1 floors of the Bangkok Art and Culture center from December 11 through December 16. Admission is
free.
The exhibit is a continuation of UNDP’s Anti-Corruption Initiative, which has engaged more than 90 universities and over 2,000 student leaders from across Thailand. Beginning in June, UNDP held anti-corruption camps for students and created the Thai Youth Anti-Corruption Network, a public advocacy network designed to recruit new students, and disseminate anti-corruption information to
university peers. 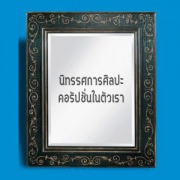