SnežanaGolubović was born in the year The Rolling Stones rocked the world with „(I Can’t Get No) Satisfaction“.
She grew up with the Belgrade Alternative Scene (BAS), heard EkatarinaVelika, read Ivo Andrić and DaniloKiš, visited BITEF (Belgrade International Theatre Festival) and FEST (Film festival), studied Drama, wrote about music and film, spent her summers in Dubrovnik and made her own radio and TV programs.
In 1992, she moved to Germany where she has worked independently as an actress / performer in professional productions directed by renowns such as Alexander Brill, Dirk Hauser, Angie Hiesl, SaskiaBoddeke and Peter Greenaway.
She was an assistant to Marina Abramović and a member of the Independent Performance Group (I.P.G.), which was founded and led by Abramović.
Since 2013 she has been a member of the performance art trio TRaG (Trojan, Reiser and Golubović).
Her works have been shown internationally at, amongst others:
NMAC Foundation, Cadiz (2004), Van Gogh Museum, Amsterdam (2005), Avignon Theatre Festival (2005), Venice Biennale (2007), OPEN International Performance Art Festival, Bejing (2008 & 2009), Royal Museums of Fine Arts of Belgium. Brussels (2011), RAPID PULSE International Performance Art Festival, Chicago (2012), I Venice International Performance Art Week (2012), Live Biennale,
Vancouver (2013), MostraPerformatus #1, São Paulo, Brazil (2014), Conflicta! – 1°
LaboratorioInternacional de Performance, Punta Arenas, Patagonia / Chile (2014), undisclosed territory #9, Studio Plesungan, Jawa / Indonesia (2015), Future of Imagination 10, Singapore (2015) and Performance Anxiety NYC, New York (2016).
www.snezanagolubovic.com
Art Talk: My Private Alphabet
The first time I was asked to give a talk about my work, I began searching for ways to introduce and describe my own performances, without divulging too much or too little, or expressing it incorrectly. So I started to develop my own alphabet.
The talk was in English. My alphabet had ten letters. Everything went well.
Shortly afterwards, I was asked to give the same talk in German – I was in trouble. ART, which for me had to come first – A as ART – ended up somewhere in the middle of the talk: K wie KUNST. Then I realized that it could get even worse. In the Serbian Cyrillic alphabet ART is almost at the very end: U kao UMETNOST.
But how could I start my alphabet backwards? And why does ART in English rank in first place, in German in the middle and in Serbian (almost) at the end?
I began to play, search and research, making my own alphabet, changing it, turning it upside down and adding new letters when new works and inspirations came.
My alphabet, like my performances, is never the same. And this one will be for sure very different. But luckily it will start with A.
A as ART…
Performance art: thREaD of LOVE[for Bangkok]
I grew up with my mother. She was an editor at the most important daily newspaper at that time in former Yugoslavia. In her free time she created miracles, knitting some amazing things: blouses, skirts, jackets, dresses, everything.
A couple of months after my grandfather died in 1985, my mother fell seriously ill. She was in hospital for a long time. I visited her every day. Once she felt better she asked me to bring her some red wool. She wanted to knit something for me …
And she did …
When she came out of the hospital, I received the most beautiful red pullover – ever.
I still have it. And I still wear it.
Later, at the beginning of this century, my mother was diagnosed with Parkinson. Her hands started to tremble and she – my knitting Queen – was suddenly no longer able to knit. Never again…
I took one of her red threads … tried to learn to knit. Failed. Tried again, asked some other, more gifted women for help … until I had one gorgeous long red knitted dress.
That is how it started... many years ago.
Meanwhile I did many different works with the thREaD: diverse performances - short or durational, one photo edition, durational performance installation / exhibition(s)... thREaD, Thread of Life, Thread of Love…
I also do an artistic research about the red thread / yarn in the art(s) and literature (especially in the performance art, of course) and about the meanings and uses of this material in different cultures worldwide.
In my artist talk about thREaD I do talk (a little bit) about my own work, but mostly and with much more passion and joy I introduce the works of some other artist who work with this material - the artist I know (or not), but I like and highly respect.
Performance : Art Talk : My Private Alphabet Performance Art: thREaD of LOVE [for Bangkok]
Artlist : SnezanaGolubovic
Show time Saturday 2 December 2017
15.30 – 16.30 hrs. Art Talk: My Private Alphabet
17.00 – 18.00 hrs. break; drink and snack
18.30  - 19.30 hrs. Performance Art: thREaD of LOVE [for Bangkok]
*Talk in English ; Translate into Thai
*Ticket : free
More information : 0851503048 (Nopawan) Email :blurborders07@gmail.com 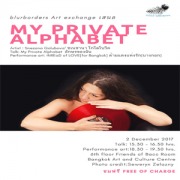 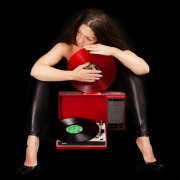 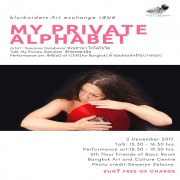