INTERNATIONAL DANCE FESTIVAL (FRIENDS OF THE ARTS FOUNDATION)
9 November- 3 December
Exciting range of dances, workshops, lectures
‘Dance is Education through Movement’- VararomPachimsawat
LEKHA SHANKAR
The International Festival of Dance and Music is over.
And  now comes the  International Dance Festival , organized by  the Friends of the ArtsFoundation. Now in its 17th year, this is the best-known festival for contemporary dance in the city.

The shows, this year, include  dance-troupes from Portugal, Spain, Turkey,  a brilliant dance-film from Israel, Bollywood sessions, an important charity dinner, and an exciting range of lectures,master-classes,workshops.

The brain behind the Festival,is VararomPachimsawat, Co-Founder  of the Foundation, who studied ballet in London ‘The Royal School’ , and was  the first professional ballerina of Thailand to dance with the international dance company abroad. She started a dance-school , called ‘Dance Centre’ more than three decades back,which became hugely popular, as she taught both classical and contemporary dance forms there. Infact, she produced numerous students who today run more than 20 schools of their own.
‘Dance is  Education through Movement’ says Vararom, and in order to spread this ‘education’ to as many segments of students as possible, she held dance-programs, dance-classes and workshops for numerous foundations of underprivileged children, apart from choreographing many dance dramas herself.
All these- dance performances, choreography sessions, workshops, lectures- form the basis of her  International Dance Festival, which first started 17 years back, to celebrate ‘World Dance Day.’ Thus, this year’s Festival has live performances by top dance groups from abroad, followed by lecturesand workshops by the foreign choreographer , to a wide range of dance-students .
There are  varied unique venues for the performances too.After all, Vararomwas the one who held the International Dance Festival for  a decade in the open-air Benchasiri Park. She has also held performances in shopping malls, hospitals and various non-traditional venues.
The grand Opening event , at this year’s Festival, is on 9November, andwill be in the open-air lawns of the Portuguese Ambassador’s heritage mansion. It is a charity event whose chief aim is to raise funds, to train at least 20 underprivileged youth  in dance.

The charity event would be a gourmet,sit-down dinner,  which would be accompanied by a Silent Auction ofgorgeous artefacts donated by  well-known Thai personalities.
The highlight of the evening, ofcourse, would be a performance by the famed Olga RorizDance Company  from Portugal, whose 15-member troupe would be enacting Stravinsky’s memorable  ‘Rites of Spring’ .In keeping with her sustained aim to introduce Thai talents on the global stage,  ten talented Thai dancers who were selected to partake in the show, with the world-famous  Portuguese dance troupe.

Olga Roriz,the founder of the Company , is one of  Portugal’s best known dancers who has performed with the top ballet companies of the world. Her works have been presented in countries as varied as US, Brazil,Mozambique, Korea,and she has won a spate of international awards

The great dancer will hold a  2 weeks  workshop and rehearsal  with Thai dance students before the Gala Fund Raise Evening. The ‘Opening Party’ of the Festival, will be on 14 November,when the ‘Nik’ Zuk Dance Co from Spain will perform, at the lush Helix Garden of the EmquartierMall.

The Spanish dance group is noted for their  varied dance styles,including break-dancing,derviche spin, circus acts,and have excited audiences around the world, Their performance will be extra vibrant,as they will be accompanied by a sensationalmusic-band who will spin out a scintillating mixture of folk country, and blues musical rhythms.

The Artistic Director of the Spanish dance-troupe will hold a Contemporary Dance Workshop, for Thai students ,the next day after the show.

The Izmir State Opera & Balletare the  dance group to perform next at the Festival,on
24 and 25 November,at the BACC.

They will enact a marvellous modernballet ‘The Colour of Dance’, which infact could be called the ‘Colour of Love’as it  enacts thevibrant facets of Love!

The Turkish dance program will be followed, next day,  by a Master-Class as well as Ballet- Workshops for four days,targeting different age-groups, by the Ballet Master of the group, Murat Akaoglu.

There will be a Double Bill on 26 November,  at the BACC ,by two totally diverse  dance groups- the Oplas Dance Company  from Italy and  the ‘Anthony Hutchinson from Japan.
The former will enact their experimental and exciting version of Swan Lake, called ‘ Once Upon a Time—A Swan Lake’ ,and the latter will enact their individualistic experimental show called ‘“ Malignant temperaments” by Prolific Visionary Production
Both the dance-groups will also hold workshops for Thai dance students, after the show. Infact the Anthony Hutchinson will hold a hip hop workshop.
A unique show at the Dance Festival this year will be a film-screening from Israel,on the life of one of their most individualistic and renowned choreographers,and Artistic Director of the well-known Bathsheva Dance Company , OhadNaharin.
The film, called ‘ Mr Gaga’, will be screenedatBACC, on 28 November.
It is based on a dance-movement that this dancer-choreographer  invented, called ‘gaga’.
Ormay be the title refers to his huge popularity in Israel,where he is a kind of ‘Mr Gaga’!
The rivetting film, made by renowned docu film-makerTomerHeymann, over a period of 8 years, traces the personal and professional life of a charismatic artiste who created waves both in Israel and New York

The film-screening will be followed by a discussion with well-known Thai film professionals.

There will also be a ‘Showcase of  the Works of Young Thai  Choreographers’, which is an important feature of the Festival. Infact,Vararom is proud that many Thai choreographers have got ‘discovered’ at this Festival,and performed abroad with many foreign dance troupes.
Meanwhile, right from November to February ,there will be a spate of Free Yoga classes  and BollwyoodWorkshops, at the Benchasree Park, these workshops will conduct in collaboration with Bangkok Metropolitan administration and  the Indian Women’s Club.

Last but not the least comes a Ballet Workshop for students and semi-professional dancers by Charles Jude, Artistic Director of the Ballet de L’Opera de Bordeaux, on 13-14 January, 2018

Considering that  the International Dance Festival officially opened with a scintillating Indian Classical Dance Program at the Chalermkrung Hall in September, this year’s performances have stretched as many as 6 months. Next year, they may be held throughout the year,said the vivacious Vararom.

For someone who is so passionate about spreading the dance culture as much as possible,and to as many varied segments of youngsters as possible, the International Dance  Festival is indeed, the inner core and outward reflection  of prima donnaVararomPachimsawat’s deep artistic sensibility.
For details of Festival, check
www.FOTAF.org
For Tickets
www.ticketmelon.com 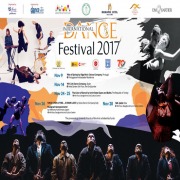 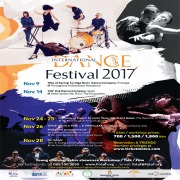