Eraserhead (USA / 1977)
With Thai and English subtitles (Running time 89 minutes)
Tickets are available at 15.00 hrs.
Film screening starts at 17.00 hrs.
Auditorium, 5th floor, Bangkok Art and Culture Centre
The third screening of Cinema Diverse 2017: The Invisible Hands on 23 September is an American film, “Eraserhead” chosen by Nopawat Likitwong, the sound designer and sound engineer of critical acclaimed Thai films including “Pee Mak”, “The Teacher's Diary”, “The Blue Hour”, and “#BKKY” as well as international films such as “Operation Mekong” and “The Brink”. After the screening, Nopawat Likitwong will give a talk and a Q&A about the importance of sound in cinema and his experience as a sound designer.

Written, produced, and directed by David Lynch, Eraserhead tells the story of Henry Spencer, an unfortunate worker who is left to care for his grossly deformed child in a desolate industrial landscape. Throughout the film, Spencer experiences nightmares and hallucinations caused by living with his angry girlfriend, the unbearable screams of his newly born mutant child and his own desperate mind. Not only these drive him and his girlfriend crazy, they also leave the audience with what the director called “a dream of dark and troubling things”.
Eraserhead's sound design has been considered one of its defining elements. The film features several constant industrial sounds, providing low-level background noise in every scene. Its foreboding mood was inspired by Philadelphia’s post-industrial history. Lynch worked with sound designer Alan Splet to create something more unusual, evoking the sounds of heavy machinery while imbuing the whole thing with a rusted, deteriorating quality which was hailed as the masterpiece of “audio surrealism”.
“The sound of this film was designed to lure us into a maze of a haunting dream of dark and frightening place ...if a picture tell us what we see, a certain sound from this film can always emotionally disturb us” – Nopawat Likitwong
Nopawat Likitwong
Nopawat graduated with a B.A. in Interior Design Major and a Master of Fine Art, both from the Faculty of Art and Design, Rangsit University where he fostered his interest in film and decided to further his study in Sound Design in Film at Vancouver Film School, Canada.
After returning to Thailand, Nopawat began working as a sound editor and a sound mixer for several different films from a documentary (Boundary) to a blockbuster (Pee Mak). He currently works as a production sound manager at One Cool Sound Studio with impressive credits under his belt including “The Blue Hour” and a Hong Kong big budget action film, “Operation Mekong”.
Entry fee is 60 Baht per person (with a free programme).
Tickets are available at 15.00 hrs. Film screening starts at 17.00 hrs.
*In English with Thai subtitles
*The post-screening talk will be in Thai with English translation. 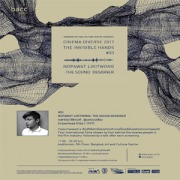 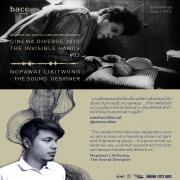 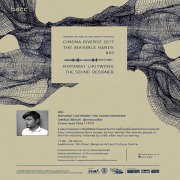