The Diary of Anne Frank an opera by Grigori Frid

By Opera Siam with the Cooperation of the Embassies of Israel and Germany
Time: 19.00 hrs.

Opera Siam with the Cooperation of the Embassies of Israel and Germany
presents
By Popular Request, additional performances of the Thai Premiere Production of:
Grigori Frid (1915)
THE DIARY OF ANNE FRANK Op. 60 [1969]
Monodramatic opera in 4 scenes and 21 episodes by Grigori Frid based on the original diary of Anne Frank (R. Rait-Kovalkova)
Kaleigh Rae Gamaché as Anne Frank
Siam Philharmonic Orchestra
conducted by Trisdee na Patalung
Bangkok Art and Culture Centre
English version by James Briscoe & Alla Abramovich-Gomon [ 60 minutes ]
In brief scenes (“Birthday”, “School”, “Conversation with Father”, “Summons to the Gestapo”, “The Hiding place” and “Razzia”) unfolds the depiction of the fate of the 13-year-old Anne Frank, who hides with her family in the back part of a house in Amsterdam from July 1942 until her arrest in August 1944. Anne’s diary entries from this time show the emotional pressure borne by the child, but also that her moral power and unbending will to live cannot be broken by this pressure. Anne’s profound thoughts, her naive joy over a gift or a patch of blue sky, but also her fear and will to remain courageous, the budding love for Peter, her sense of situation comedy, hope for freedom and more humanity – all this also finds oppressive expression in the music. The libretto, almost literally taken from the original, is integrated into a musical-lyrical narrative the emotional content of which shows both the tragedy of the events and the girl’s poetic expressive power. Special attention is devoted to the characters who appear in Anne’s monologues but not in person: her father, her sister Margot and friends. Through these there results a special multi-dimensional quality which expands the scope of the monodrama’s plot. 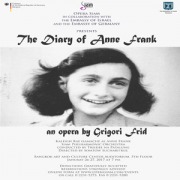 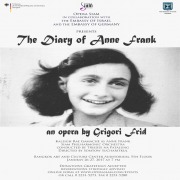