Art Exhibition: The Heart of the Earth

Co-organized by Independent Artisits
A collection of paintings and artworks from Thai artists and interested people, expressing their feelings on the tragedy of the evicted Gransfather Kaw-ee (also known as Ko-i), of Karen community in Bang Kloi Bon. They came to Bangkok's Administrative Court on September 7th. On that day, Karen villagers living in the Kaeng Krachan National Park regretfully accepted the Administrative Court's verdict allotting them only Bt10,000 each in compensation after they were forcibly removed from their homes by National Park officers.The community is also barred from returning to the land,
which they say belonged to their ancestors.
This exhibition was inspired by a quote from Grandfather Kaw-ee. He said at the Court,
"I swear on all sacred spirits that I have lived on that land [Ban Bangkloi Bon] all my life.When I first remembered the taste of my mother's milk, I was there. That is my ancestors'l and, but if the court tells me to stay elsewhere, I'll follow. But I would like
to say that it is against my will and the authorities have forced me out of my home." 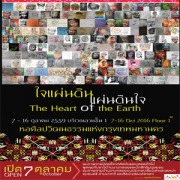 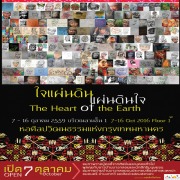