CROSSING CULTURES AND ARTS DISCIPLINES: An evening with Danny Yung

Danny YUNG Ning-tsun
An experimental art pioneer, Danny Yung is a founding membercum Co-Artistic Director of Zuni Icosahedron and Chairperson of the Hong Kong Institute of Contemporary Culture.
Yung is widely regarded as one of the most influential artists in Hong Kong and the neighbouring regions, and an advocate in experimental arts and new art forms.  In the past 40 years, he has been actively engaged in various fields of the arts, including, theatre, film and video, comics, as well as visual and installationart. Yung has contributed significantly to the provision of a platform for both acclaimed and emerging artists to explore and carry out cross-disciplinary and cross-cultural collaboration. As director, scriptwriter, producer and stage designer, Yung has created over 100 theatrical productions, which have widely toured to over 30 cities in North America, Europe, and Asia. In 2014, Yung is the laureate of the 2014 Fukuoka Prize – Arts and Cultural Prize.
Yung is the artist of cross-disciplined and cross-region Tian Tian Xiang Shang conceptual comics.  On and off stage, Yung is an enthusiastic protagonist for innovation in cultural policy,exchange, institutions and education. In 2009, Yung was conferredthe Merit Cross of the Order of Merit on Ribbon by the Federal Republic of Germany in recognition of his contribution to the arts and cultural exchange between Germany and Hong Kong. In 2008, with Tears of Barren Hill he was honoured the Music Theatre NOW Award by International Theatre Institute.
Currently Yung is also Chairperson of the Asia Pacific Alliance of World Cultural Forum, Convener of the Chinese Creative Industries Forum, Chairperson of the Hong Kong – Taipei –Shenzhen – Shanghai City-to-City Cultural Exchange Conference, Member of Design Council of Hong Kong and Board Member of the Lee Shau Kee Hong Kong School of Creativity.
*Free Entry 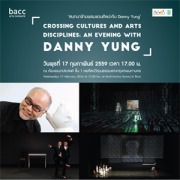 CROSSING CULTURES AND ARTS DISCIPLINES: An evening with Danny Yung