Around the world in 90 minutes on violin

The official program of cultural events organized by the Embassy of Italy, presents:
“Around the world in 90 minutes on violin”
Olen Cesari accompanied by Michael Rodi and LaviniaMancusi
Thursday,18February 2016 -Cocktail at 18.00- Concert at 19.00
Bangkok Art and Culture Centre (BAAC), 939 Rama 1 Road, Wangmai, Pathumwan, Bangkok,Auditorium, 5thFloor
Italian Festival in Thailand 2016 proudly presents “Around the world in 90 minutes on violin”, recital with one of the most eclectic violinist of the European scene, Olen Cesari,who will entertain the audience with a fusion of classic, Balkan and jazz music. Maestro Cesari will be accompanied by an exceptional Michael Rodi on piano and by the extraordinary voice of LaviniaMancusi.
Olen CesariBorn in Albania, with Italian origins, Olen begins to study violin at age of three. Considered a child prodigy, he performs in public for the first time at the age of five. At 13, Olen graduates with honors from the Tirana Academy of Music and Arts.
In 1994, Olen moves to New York where he begins to explore different kinds of music: jazz, black, soul, rap, country and ethnic. In this period, he performs with Maroon 5, Lenny Kravitz and Sheryl Crow.

He then comes back to Europe, where he performs in some of the most important venues, andone of the highest points of this periodis the exhibition for Pope John Paul II, when he has also the honor of performing alongside rock legend Bob Dylan and the unforgettable jazz pianist Michel Petrucciani.

In the following years he composed several soundtracks and released his first album in 2010, UNEXPECTED, which immediately got the top of I-Tunes chart, and which got him worldwide appreciation.
LaviniaMancusiThanks to her many abroad experiences, LaviniaMancusigets into ethnic and world music, and approaches herself to various forms culture. Indeed, Ms. Mancusi has a repertoire ranging from the Italian and Mediterranean music tradition to the rhythms of South America. She can play percussions and violin, and is also a well – appreciated jazz and modern music singer.
Michael RodiBorn in Johannesburg, he begins playing piano at the age of 6 and quickly starts to study and master classical music, ranging from Bach to Chopin to Ravel, exploring also other kind of music, such as world music, traditional African music and jazz.In 2009 he starts performing with Olen Cesari and the International Clandestine Orchestra, along with he is still touring the world.
Olen Cesari Live in Rome https://www.youtube.com/watch?v=W72Gjk8DG_g
Free admission (registration required)
For reservations and info please send an e-mail to: ufficioculturale.bangkok@esteri.it
See more at: https://www.facebook.com/ItalianFestivalThailand/ 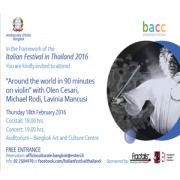 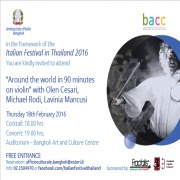