Four major considerations were used in the development of the design concept.: To create a building that was flexible in its use, and one which allows the artwork to be displayed in flexible arrangements in the various spaces with different light, volume and character. To create a building of appropriate character including reference to Thai architecture. The building will be an important icon in Thai culture. It must be exciting, inviting and usable, and should reflect the dynamism of Thai modern Art. The Building was designed to have high spaces to accommodate the art. In addition the central space should act as a symbol of the building and should set the tone for the entire interior. The building, especially the galleries must make optimum use of natural but controlled natural light. The upper floors of the building, which house the galleries allow the most opportunity to advance this idea

Of major importance was the integration of the commercial area as a support facility to the museum. In our opinion to make the commercial area a completely separate entity, would not be commercially viable, since traditionally center shopping centers are larger than that outlined in the design program. With proper management and a proper selection of shops related to art, both the gallery and the commercial area can be mutually supportive. 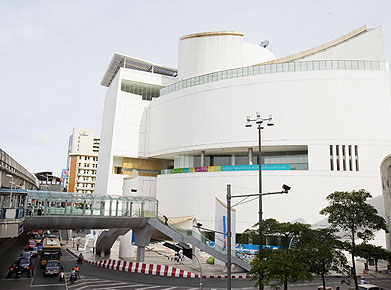 Although the building houses separate functions including commercial areas, it is designed as one architectural theme. Interior space is developed around a central circular atrium that provides a visual highlight when entering the building. It also leads the eye to the upper floors that house the main gallery rooms. The central forms allow the activities of various functions to be seen. Since this is a building for the public, excitement and the showing of the various activities that will take place will allow civic interaction. The central spaces also lend itself to an easily understood access and flexibility. The Building is designed a continuous space. In the future should it be desired to change some of the commercial area into gallery use, this can be easily done.

The building should be modern in every respect but at the same time should reference historic or generic Thai forms. The architectural design references echo several characteristic Thai shapes and forms.

The central atrium is designed to be an important element in the image of the building, and act as a unifier to the various activities envisaged. It is hoped that it will become an important public space in Bangkok and act as a catalyst between art and the interested public. It is designed as a very public space with much activity, public interaction, and anticipation of the art in the galleries. The space is circular in plan and is crowned with a skylight. The centre circulation ramp takes the circular shape. In this space it is possible to observe other activities of the building 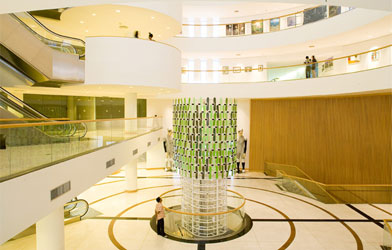 Flexibility Diversity and Interest : The architecture should play a supportive role to the art displayed. While allowing flexibility in arrangement and layout, the galleries should provide the opportunity of different spaces and characteristics to display the artwork